February 29, 2008
Sitting here at home reflecting on a great week at the IL-TCE Conference and specifically what I learned as I prepared and presented my presentation. Of course I had the advantage of being the teacher, so I learned the most out of anyone in the session.

The presentation itself was on tagging. Well, not exactly tagging. It started with the act of tagging and using it on the low end of Bloom's Taxonomy to categorize and sort information. My goal was to move beyond that and use the technology to get kids to get to higher order thinking in comparing and contrasting, analyzing, and synthesizing information.

One of the examples I used was comparing 2 tag clouds of past presidential speeches: 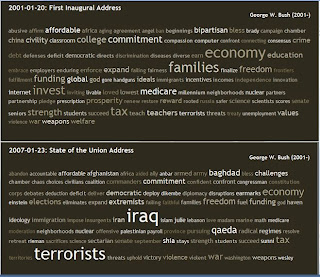 Easy to see some shifts in focus over the course of a presidency. My point was - which is more interesting and impactful for a kid? Telling them what happened during a presidency or giving them some clues to the mystery and letting them find out for themselves?

I don't want to go through the whole presentation, you can see Mike Bachrodt's backchannel of it here.

Anyway, here is what was reinforced for me by doing this presentation. Connections.

So as I am talking about all of this I am suddenly reminded of James Burke. He had a TV series called Connections, another called The Day the Universe Changed (used it in earth science class), and wrote an article for Scientific American.

Connections explores an "Alternative View of Change" (the subtitle of the series) that rejects the conventional linear and teleological view of historical progress. Burke contends that one cannot consider the development of any particular piece of the modern world in isolation. Rather, the entire gestalt of the modern world is the result of a web of interconnected events, each one consisting of a person or group acting in rational self-interest with no concept of the final, modern result of what either their or their contemporaries' actions finally lead to.

You can totally see an example of this at the site Reconnections with James Burke.

This way of thinking is what my presentation really was about. Taking something traditionally linear (text) and tearing it apart and putting it back together in a new way (non-linear) to gain a new understanding through new connections.

I made some new connections as well - I just found a way to link tagging, to tag clouds, to Bloom's Taxonomy, to higher order thinking, to connections, and eventually to James Burke. I am pretty confident that he would understand and appreciate how I got there.

Popular posts from this blog

Understanding the Superintendency - The Role of the School Board: A Basic Overview

In recognition of School Board Member Appreciation Day last week, here is a primer on what it means to be a school board member.
As a superintendent I have a single supervisor that consists of 7 people. These 7 volunteers are elected to serve as representatives of the community. As community members indicate they are interested in serving as Board members, before they run for a 4-year term, I share this document with them: “What it Means to Serve on the Board” that serves as an introduction to the role. I also meet with them and share my experiences as a superintendent, but also as a former board member. Most of this information I provide is from the Illinois Association of School Boards, the professional organization that supports school board members in Illinois. The IASB outlines 6 main responsibilities of a school board: Clarifies the district's purpose Connects with the community Employs a superintendent Delegates authority Monitors performance Takes responsibility for itsel…
Read more

Embedding Google Calendar in Another Language

November 09, 2011
This question came up today in the Google Apps Certified Trainer Group. It is actually pretty easy to do.


To make the change you add &hl=XX where XX is thelanguage codeto the embed code.

With this embed code:

Pretty simple! Some of our ESL teachers are displaying their homework calendars in multiple languages now.